The Karma Controller lets you procrastinate on Reddit more efficiently. The buttons control the following functions:

The professionally printed boards came in and I gave away five of them. Now they’re commercially available at http://karmacontroller.com/

THE BASICS OF HOW

If this is already too much for you, consider just signing up for the drawing: http://karmacontroller.com/. If you’re interested in the process, read on. 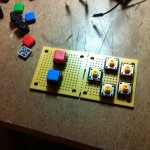 Laying out the buttons 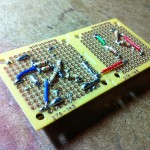 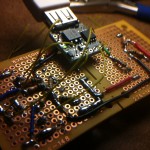 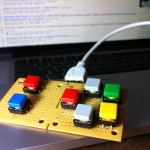 I really wanted seven buttons on this thing, so I can browse Reddit without having to put it down. The problem was that the DigiSpark only has 6 digital inputs. Fear not! Turns out if you use one pin as an analog input, you can put two buttons on it. To have them register different analog values, you have to put a resistor on one of them. I followed this instructable.

After wiring everything up, I tested it only to find that pin 3 was freaking out and pin 4 wasn’t registering any key presses. The DigiSpark uses these for USB communications, so you can only use them if you don’t need to send USB commands. Clearly, I failed to read this on DigiStump’s limitations page.

Not to worry, though. I was able to just use the analog method a few more times and get 5 buttons on two analog pins. 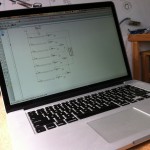 Drawing the schematics and laying out the board in Eagle. 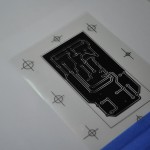 Laser printed layout onto transparencies. Two layers for each side so they’re really dark. 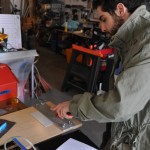 Zack cutting some photo-sensitive copper board. 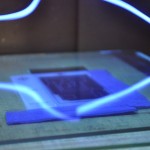 Exposing the board under UV light with the mask pressed flat under glass for 6 minutes. 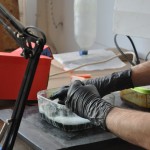 Soaking the board in developer and then copper etchant. 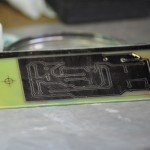 Here’s the etched board. 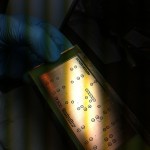 I removed the photo-sensitive layer with denatured alcohol on both sides. 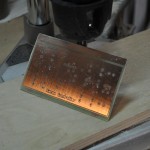 Drilled holes for components. The front and back were nicely aligned. 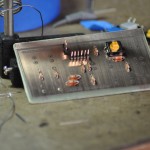 Placing and soldering components to the board. 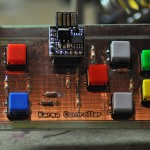 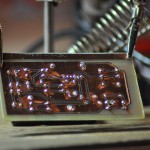 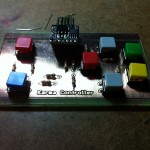 Zack Freedman helped me create this prototype – everything from advising on Eagle issues to guiding me step by step through the etching process. The images explain the process quite well, though, here are some tips I learned:

They’re at GitHub for safe keeping.