Do you need to exercise some control over the physical world, but don’t want to leave your computer? Well then, take a minute to set the color of my desk on a day of your choosing at http://colormydesk.com/

Yes, I backlit my desk and connected the lights to a server that anyone can control. 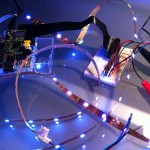 First step was to breadboard the circuit to make sure it worked. It did! 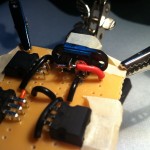 I then set out to solder it together on some proto board. 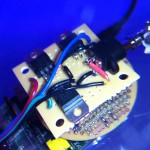 I mounted it on a second proto board to which I soldered a Raspberry Pi header. 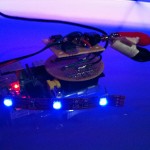 The test worked! So I went on to write the software. 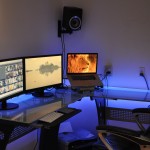 Here’s the whole setup functioning with the full string of lights installed behind my desk.

If this is already too much for you, consider just going to the site and setting a color: http://colormydesk.com/. If you’re really interested in that how / why, read on.

Forcing the Pi to Fake PWM

The first step was to get the Raspberry Pi to run some lights. Since the Pi doesn’t have 3 PWM pins, I used this tutorial on using   ServoBlaster for RGB lights.

I ran into some issues and had to use Wheezy instead of Occidentalis because its kernel version, 3.2.7 was more up-to-date. Then I used the older version of ServoBlaster, instead of the one built for the newest 3.6.11 mainly because I didn’t want to figure out how to upgrade the kernel. I used this thread to figure out kernel versions: http://www.raspberrypi.org/phpBB3/viewtopic.php?t=15011&p=278566

Once that was working, I soldered the basic circuit onto some proto board. I then realized I should’ve used my Raspberry Pi proto board instead of the regular Radio Shack one. But no worries, I hooked up some headers and a custom shield was born.

CakePHP and a Web Server

I built the CakePHP site on a separate web server because I didn’t want the Pi to get overloaded. Besides, I’m a web developer and have plenty of server resources at my disposal. I then wrote some Python code on the Pi to pull the data from the site’s JSON feed with some simple authentication to protect email addresses from the public. A crontab runs every day at 6pm ET to pull the data and turn the lights on. Another one runs at 11pm ET to turn them off.